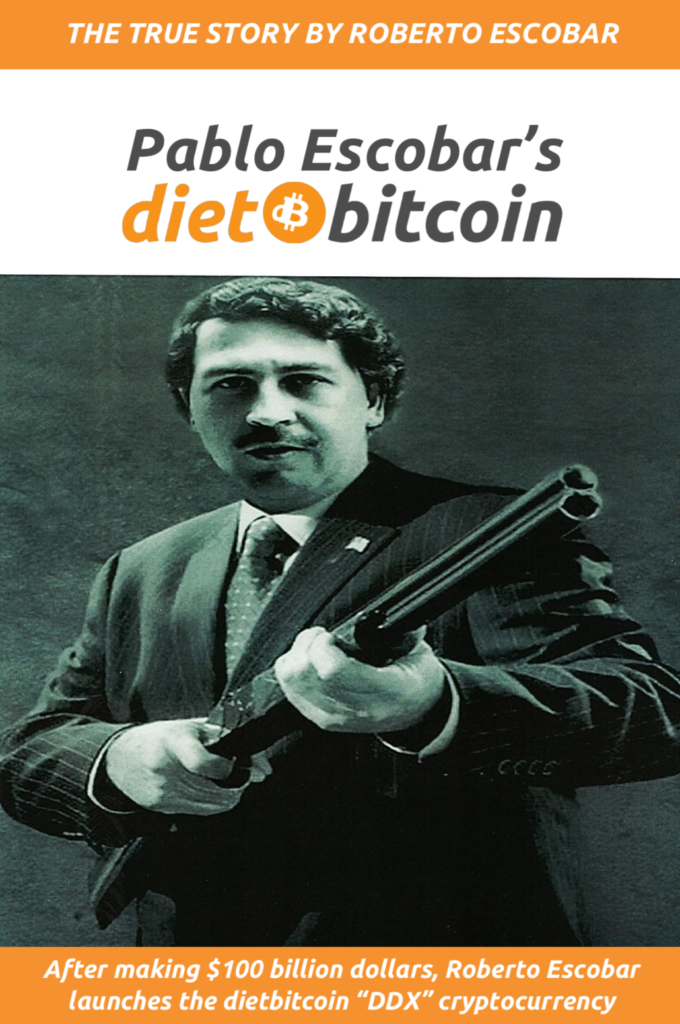 The information that follows outlines the current state and future vision of Roberto Escobar’s new cryptocurrency, dietbitcoin (DDX), related events, and an overall market perspective according to the Escobar Inc executives.

DISCLAIMER: I do not currently have any business interest or investments in dietbitcoin or Escobar Inc. The following information is intended to be an objective summary of the information provided.

I recently met with Olof Gustafsson, CEO of Escobar Inc, and Daniel Reitberg, COO of Escobar Inc, during a recent trip to Dubai. After hearing about dietbitcoin, the new cryptocurrency envisioned and offered by Pablo Escobar’s brother, Roberto De Jesus Escobar Gaviria, and the related information I had read about in media reports regarding the currency and Mr Escobar, I was interested to hear a firsthand account of this intriguing new offering and business plan from one of the most successful businessmen in history.

Mr Gustafsson is critical of the current state of cryptocurrencies, noting the recent problems that the market and investors have faced with fake companies, worthless coins and tokens, and price currency manipulators placing massive sell and buy orders in short order to cause price swings and market volatility. Other threats to the current cryptocurrency market, according to Gustafsson, include smaller exchanges mimicking the moves of larger ones, regulation in many countries, volatility in trading, and a general lack of substance and market depth.

“It’s like playing roulette in vegas but you don’t have the ball, you’re not going to win” – Olof Gustafsson, Ecobar Inc CEO

According to Mr Gustafsson, changes in the cryptocurrency market are leaving many unsophisticated investors in the dust. Large block trades continue to manipulate the market, hackers exploit weaknesses in currencies, and questionable changes in currency volume mean that market capitalization figures posted on even the major exchanges do not account for these artificial increases. Hackers have exploited smart contracts to kill tokens, and in some cases have even illegitimately created new tokens, and no action is being taken against the owners and promoters of these currencies for failing to protect their coins and sometimes even complicity aiding these criminals. Mr Gustafsson believes that the above factors, combined with the difficulty many companies offering ICOs will find converting users to capital, will create a massive collapse of the market.

The CIA and Bitcoin

Roberto Escobar has gained attention for his assertion that the CIA is behind Bitcoin. Further details of this are provided in Mr Escobar’s book, Pablo Escobar’s Dietbitcoin, along with information about Escobar’s entrance into the cryptocurrency market and his vision for his currency.

Mr Gustafsson elaborated on this matter, stating that Bitcoin creator Satoshi Nakamoto’s claim that he mined one million Bitcoins in a year is impossible due to the processing power that this would take. Rather, Gustafsson believes that the CIA was involved in this effort and that the agency held $10,000,000,000 in bitcoin ($9,000,000,000 at the current value) and continues to stockpile this currency due to the sheer market power that this volume holds. “If [the CIA] sold all their Bitcoin,” Gustafsson states, “all cryptocurrencies would go to nothing.”

Mr Gustafsson explains that some people have stated that Mr Escobar believes that the CIA has built a backdoor into Bitcoin’s code that they can exploit when they want to bring the currency down. Gustafsson explains that Mr Escobar has never made this claim, rather the mechanism by which the CIA would be able to destroy Bitcoin’s value (and that of all other cryptocurrencies) would simply be to sell their massive Bitcoin stockpile.

In addition to creating and stockpiling Bitcoin, Gustafsson suspects additional CIA involvement through ownership or control of a major cryptocurrency exchange. Furthermore, Gustafsson believes that Litecoin founder Charlie Lee is working for the US government.

Mr Gustaffson explains that the market has reached has reached a point at which “you need a fresh start” since “now you have a sophisticated market” that will evolve differently.

“What we can tell these people who own Bitcoin is be very cautious,” Gustafsson advises. While investors can purchase DDX with Bitcoin, Gustafsson explains “the reason we accept Bitcoin is so people can convert it,” explaining that the current cryptocurrency market is “too fragile to sustain the conditions we have now.”

The Advantages of Dietbitcoin Over Other Cryptocurrencies

“This is an extremely different ICO,” according to Mr Gustafsson. This is due to the unique attributes of the underlying currency. Mr Gustaffson lists a number of advantages that DDX has over other cryptocurrencies. From a technical perspective, it is not a hard fork like many of the other currencies. And strategically, the following attributes separate this coin from the others:

Strategies to Connect with Banks, Retailers, and More

Mr Gustafsson states that Escobar Inc has a strategic plan to work with banks and businesses to increase the popularity of DDX as a currency and method of payment. This proactive approach to promoting the currency (as opposed to the passive method of market adoption many other currencies employ) also distinguishes DDX and Escobar Inc from other new currencies and the entities behind them.

This feature allows retailers such as hotel chains to have the ability to change to currency, resulting in fund recirculation. This will be accomplished with a POS system using a posted DDX/USD (or EUR, etc) rate. “Retailers don’t want dietbitcoin or bitcoin,” Mr Gustafsson asserts, “they want fiat,” and this feature allows retailers to collect “instant fiat from Escobar Inc.” Escobar Inc is currently in negotiations with a major hotel chain in Europe. This recirculation results in market liquidity and solves an issue with cryptocurrencies in general, which is general acceptance as a payment option, since, as Mr Gustafsson points out, Bitcoin is not current accepted by restaurants or hotels.

Both executives I met with explain that dietbitcoin is intended to be a useful currency for retails consumer. Mr Gustafsson contends that this is a “charitable project,” since “Mr Escobar is willing to buy back all of the coins.” This, along with the fact that this ICO is further in its development than many currencies (all coins have been pre-mined, development of wallets has been completed) make this offering stand out from other new currencies.

Interest in Escobar and DDX (Exclusive)

Mr Escobar and his currency have generated much interest, not only from ICO investors but from big players in the cryptocurrency industry as well. For example, Mr Gustafsson showed me emails from McAfee Antivirus founder Jim McAfee expressing interest in DDX. McAfee “approached Mr Escobar” with interest in the currency “but wanted too many coins,” according to Gustafsson, who says that he will release his emails with McAfee in the near future.

Furthermore, Mr Gustafsson provided exclusive information regarding recent contact from a Colorado-based entity formed by the infamous Satoshi Nakamoto, as shown in the document below. According to Gustafsson, Satoshi’s company wanted to sign a contract with Escobar Inc, in a move that Gustafsson believes was a ploy by the CIA to infiltrate the company.

The business strategy of Escobar Inc revolves around creating a stable, actively managed currency that can actually be used by consumers in retail transactions. “People want to have easier ways to pay,” Gustafsson says, “we’re trying to become a utility-based coin [and] that will create the value.”

The value of dietbitcoin will increase with it’s use, and the exchange rate will ultimately be set by Escobar Inc, as they will be working with retailers to exchange DDX for local currency, ensuring an upward price trend.

Furthermore, according to Gustafsson, the market is subject to many influences that should concern investors, such as price manipulation by large-scale Chinese investors and their exchanges. As Gustafsson explains, investors “rely on a Chinese exchange with a CIA-created currency,” suggesting the potential for widespread market instability and collapse.

Also, it is important to state that the man behind the vision of dietbitcoin, Mr Roberto Escobar, is interested in making DDX a sustainable, real currency that will be useful for commerce. “Mr Escobar doesn’t see it as a cryptocurrency, he sees it as an actual currency,” Gustaffson explains, “he’s not excited about the cryptocurrency, he’s excited about the currency.”

“It’s not about making money, it has to do with Mr Escobar’s vision,” according to Gustaffson. This sentiment is echoed in Mr Escobar’s book, in which he states “you are not printing money, but you are printing something that people will want to buy and exchange with one another, and that’s worth more than money” (p 265).

Escobar Inc is a company to watch as they are already working on new developments. “The first step of Escobar Inc is dietbitcoin,” Gustafsson explains. The links below provide more information about DDX and the company behind it, as well as information for investors looking to participate in this offering, which is currently in round 2 of the pre-ICO.

Stay informed of the latest news